Preserving the Sportsman History and Culture of Southwest Louisiana

My great grandfather, Clarence "Patin" Faulk, was a local guide and a trapper in Big Lake, Louisiana. He hand-carved duck and goose calls at his home starting in the mid 1930s, eventually building his art into a business, Faulk’s Game Calls. As a local guide working at different hunting camps in the southwest Louisiana area, he understood the land and water better than most. His livelihood depended on a synergistic relationship with the abundant natural resources around him.

Our family, like many families in the area, has a history and a culture that is tied to their geography. Patin lived at the end of Faulk Lane off of Big Pasture Road in Big Lake, about 20 miles south of Lake Charles, Louisiana. He would push pole his hunters from his house into the marsh and then return after the hunt. Generations of Faulks, including myself, have continued to hunt and fish in the marshes of southwest Louisiana, following in the footsteps of our parents and grandparents.

My grandfather, Dud Faulk, learned call making from Patin, his father. In 1951, Dud created a full line of calls and started going to trade shows. He has won the International Duck Calling Championship once and the World Champion Goose Calling Championship twice. He continued to grow the business with his wife, Rena, at his side. Dud was a sponsor and instructor at game calling seminars, schools and at Louisiana State University, as well as a lifetime member of Ducks Unlimited.

Our family history is as much of a part of the southwest Louisiana marsh as duck hunting is today. Dud's daughters and grandchildren assist in running the family business, introducing younger generations of hunters to the marshes and teaching them the culture and history of the sport.

Through the years, our family – like so many Louisiana families – have seen the changes in the fields, forests and waterways. Saltwater intrusion is causing marshes to die which turns them into open water. People are building houses in areas that used to be marsh. Whether through natural causes or man-made interventions, we are responsible for safeguarding our livelihoods and heritage by being good stewards of the environment.

We realize that it is up to us – along with the many other families whose histories and cultures are tied to the land and water – to protect our natural resources. Specifically, we need to bolster our marshes, as they provide coastal barriers against hurricanes and storms.

What You Can Do

● Educate yourself on environmental issues by understanding how changes to local flora and fauna and their habitats impact surrounding people, places and economy

Canaan Heard follows in a long line of avid Louisiana outdoorsmen. With four generation’s worth of passion running through his veins, Canaan enjoys hunting and fishing in every corner of Sporstman’s Paradise.

He also carries on the family tradition by marketing Faulk’s Game Calls, sharing the company’s unique story at every opportunity. As a long time Ducks Unlimited member, he also hopes to identify and to support local conservation efforts on behalf of the company, helping preserve the bayous, lakes, fields, and forests of his childhood for generations to come. 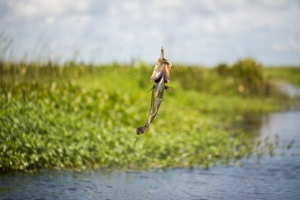 Next: Hot Fishing in a Hot Marsh