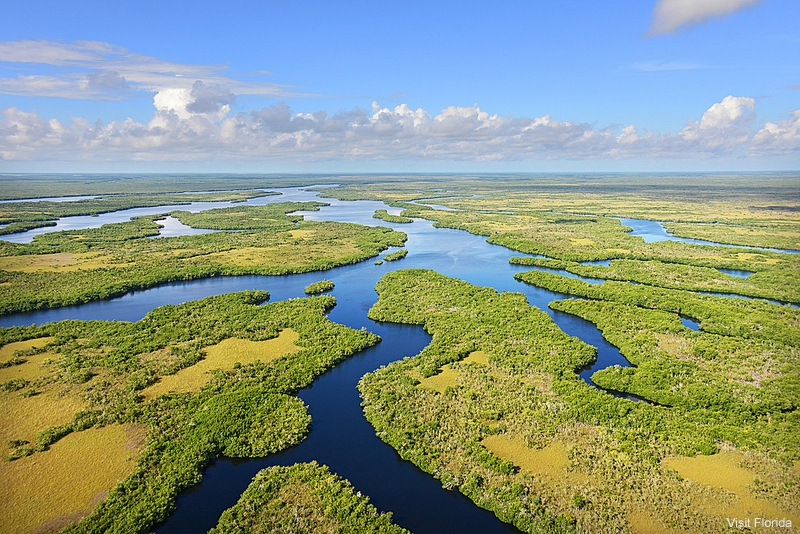 With its length and diversity, the Florida coast is a major ecological driver for the Gulf of Mexico as a whole. The state’s many coastal estuaries provide food, shelter, and important nurseries for a wide range of fish, birds and other marine life.

Florida’s long coastline also fuels the state’s economic engine. Its white sandy beaches are consistently ranked among the best in the nation, and millions of people come to Florida each year to fish, dive, swim, and view wildlife. Florida has more world-record fish catches than anywhere else in the world and it leads all states in economic return for its marine recreational fisheries. Similarly, its commercial fishery is the second-largest in the nation. Nearly 300,000 people work in the tourism industry on Florida’s Gulf Coast alone.

Although the state’s coastline is diverse and extensive, there are common problems across the coast, particularly the need to improve water quality, rebuild wetlands and oyster reefs and restore more natural timing and patterns of river flows to estuaries. Watersheds across the state also need to address nutrient pollution, stormwater, and sedimentation, which harm water quality and clarity.

In total, Florida is certain to receive approximately $1.7 billion dollars that can be used for restoration as a result of the Deepwater Horizon disaster. More than a sixth of these funds have already been awarded to projects aimed at improving water quality, restoring oyster reefs and benefiting birds and sea turtle populations, with additional expenditure plans currently underway to dedicate more of the funds. The remaining money will become available over the next decade and a half.

This project would acquire properties containing uplands around Dickerson, Levy, and Ochlockonee Bays in the area known as Bluffs of St. Teresa. The uplands are an intricate mosaic of lakes, depression marshes, mesic flatwoods, scrubby flatwoods, and scrub habitats that are connected to the Gulf by numerous tidal creeks, salt flats, and salt marshes. These habitats adjoin similar communities in St. Marks National Wildlife Refuge to the north and west.

The Central Everglades Project, authorized by Congress in 2016, is a bundle of high-impact project components aimed to improve the delivery of water to the central Everglades ecosystem. It includes elements to store, treat, and convey water south of Lake Okeechobee, and components to remove barriers to the sheetflow of water between the Water Conservation Areas and Everglades National Park. CEP will work synergistically with the EAA Reservoir and the Tamiami Trail Bridging to de-compartmentalize the Everglades and send water south. When completed, CEP will restore the natural sheetflow to 10,000 acres of degraded Everglades’ wetlands and improve the health of Florida Bay.

Florida Bay, known universally among those who love to fish there as “the backcountry,” stretches from the southernmost tip of the mainland, south to the Florida Keys. Hundreds of mangrove islands dot the bay, and are ringed by shallow flats that make a perfect home for snook, redfish, spotted seatrout and lots more.

Project Status (CEP actually consist of many distinct projects, but most are currently in this phase):
Conceptual > Feasibility & Planning > Engineering & Design > Under Construction > Completed

This project will create up to 6.5 miles of living shorelines in the East Bay area of Pensacola Bay. The project will include installation of materials to provide structure suitable for development of oyster reef habitat and will serve as a natural approach to controlling shoreline erosion. The project will apply the most appropriate substrate for oyster larvae to settle and colonize, restoring critical oyster habitat. The deployment of oyster habitat (which serves as a breakwater) and the planting of salt marsh vegetation will protect the shoreline by dampening wave energy (which erodes the shoreline) and stabilizing sediments (which cause turbidity). These improvements will promote the growth of seagrass and increase colonization by oysters.

Living shorelines created by this project will ultimately provide nursery habitat for commercially and recreationally important finfish and shellfish, as well as forage and nesting areas for birds.