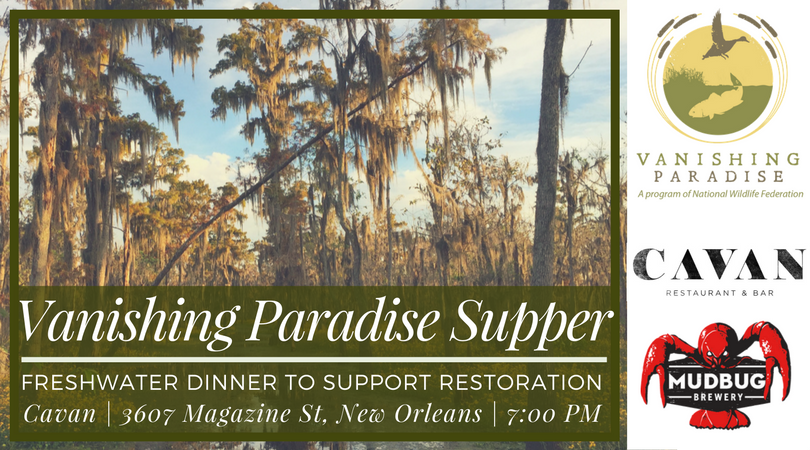 Have you ever wanted to try garfish, rabbit or alligator? Then please join Vanishing Paradise and Chef Nathan Richard at Cavan Restaurant in New Orleans for the Vanishing Paradise Supper on September 13 at 7:00 pm, highlighting species that depend on freshwater marsh in coastal Louisiana. Each course featuring a freshwater species will be paired with a beer from Mudbug Breweryout of Thibodaux, Louisiana, including a new beer created especially for this event!

As a native Louisianian and sportsman, Chef Richard is concerned about the future of the many species that depend on our healthy estuaries, including freshwater marsh. He chose to focus on these species to give attention to the need to combat the potential effects of saltwater intrusion in areas that support these types of wildlife. Diversions can help maintain a healthy estuary gradient, ensuring habitat for our freshwater species is here to stay. This event is a chance for diners to sample species not found on your typical dinner menus, but those that could benefit the most from large scale diversions.

"Most people don't realize that some of the wildlife in our coastal marshes contribute to our land loss problem. For example, nutria eat roots that hold the wetlands together, apple snails deplete oxygen levels that kill off freshwater fish, and even 'swamp chickens,' aka alligators, dig holes in the already depleted marshes to keep warm.

"As a chef, I want to do my part to help control these populations by reintroducing them as viable food sources. Louisiana culture has long been anchored in hunting, trapping, fishing -- and eating the foods supplied to us by the land. My hope is this dinner raises awareness of 'Swamp to Table' cooking and using readily available species in different ways."

Additionally, Mudbug Brewery from Thibodaux, Louisiana, is making and donating a limited edition beer for the dinner. “Mudbug Noir” is a black lager that represents the dark, clear water of the bayous and swamps of south Louisiana. The beer, although clear, will be so dark that it will look opaque, thanks for the chocolate roasted grains Mudbug is using. Yet unlike other darker, heavier beers, thanks to the long brewing process (this beer took three months to mature!), the flavor will be of a light, crisp, smooth lager.

Diners will have a chance to learn about coastal restoration and play coastal trivia games for prizes. Tickets are $65 a person with a portion of the proceeds benefitting Vanishing Paradise. Seating is limited. Please call Cavan for reservations at 504.509.7655.

Can’t make the event but would love to sample Mudbug Noir? Following the dinner, it will be available at the Mudbug Brewery Taproom in Thibodaux. If the beer gets enough of a positive response, Mudbug could feature it as part of its seasonal or flagship rotation in the future, so make sure you let them know if you like it! 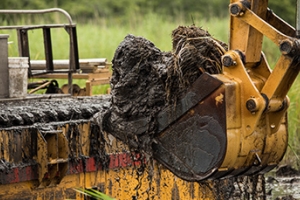 Next: Budget Proposal Could Abandon Significant Restoration Funding in Louisiana