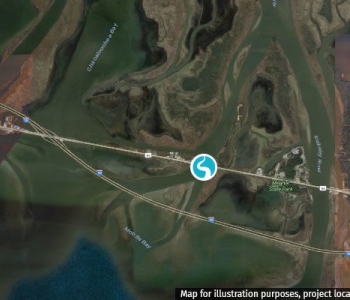 The Mobile Causeway, built in the late 1920s, restricts the natural hydrologic connection between the Mobile-Tensaw Delta and Mobile Bay. The causeway has profoundly altered the hydrology, water quality, salinity, and ecological function of the system—harming finfish, shellfish and other wildlife in the bay and in the delta. The project proposes to elevate the causeway at Justin’s Bay, restoring tidal exchange in the Mobile-Tensaw Delta by re-connecting it to Mobile Bay. 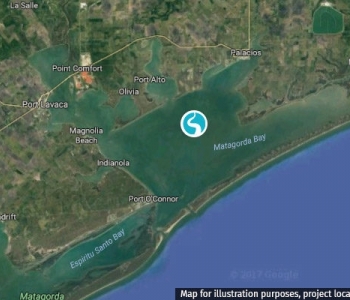 Freshwater inflows to the Matagorda Bay system are continuing to decline dramatically from historical levels as more and more water is impounded and withdrawn for use upstream of the coast. Purchasing as much as 10,000 acre-feet a year of existing water rights on tributary streams to Tres Palacios Bay would improve conditions for oysters and near-shore aquatic species within the estuarine portion of the Tres Palacios River and would enhance approximately 840 acres of wetland habitat adjacent to that section of the river. The project will also benefit the ecological health of the entire Matagorda Bay estuary system by protecting these types of habitats—and the species that rely on them—during times of drought when other inflows to the system are significantly reduced.

The Calcasieu Ship Channel, which connects the Gulf of Mexico to Calcasieu Lake, located in the Chenier Plain. Once a stable, the Chenier Plain has undergone decades of dredging to build navigation canals, which has dramatically changed the flow of water in the area. Saltwater intrusion has led to the extensive loss of freshwater marshes and increased the threat of storm surge to nearby communities. This project will build a network of dike and sill structures designed to limit saltwater intrusion from the Calcasieu Ship Channel into nearby marshes that provide habitat to fish and wildlife and a storm surge buffer to communities.

By helping sustain nearby wetlands, this project will benefit the wetlands of this region which provide important habitat to the area’s wildlife. The areas that benefit from this project include the Sabine National Wildlife Refuge and the Cameron Prairie National Wildlife Refuge which provide a variety of recreational opportunities to sportsmen, such as fishing, crabbing, and hunting waterfowl and alligator.

This freshwater diversion project stretches from the Atchafalaya River to the Houma Navigation Canal, which is part of the Gulf Intracoastal Waterway system. Terrebonne Basin marshes are equally far away from the Mississippi and Atchafalaya rivers and are blocked from significant amounts of river water and sediment. As a result of saltwater intrusion and sediment starvation, these marshes have been rapidly converted to open water. This project would dredge and deepen the Gulf Intracoastal Waterway to increase the flow of fresh water from the Atchafalaya River eastward, to help sustain northern Terrebonne Marshes.

Over the last 50 years, while there’s been net land gain around the Atchafalaya River and Wax Lake Outlet, more than 250,000 acres of land have been lost in Terrebonne Bay. This project will increase freshwater input into northern Terrebonne marshes to sustain and protect freshwater marshes, benefitting important habitat for fish and wildlife, like the Mandalay National Wildlife Refuge where sportsman can crab, fish, hunt waterfowl, hogs and white-tailed deer.