Duck Commander, a world-leader in the manufacture of duck calls and waterfowl hunting equipment and the company featured in the A&E television program “Duck Dynasty,” recently added its name to a list of more than 800 businesses and organizations to sign a letter urging Congress to support the restoration of the Mississippi River Delta’s imperiled wetlands. 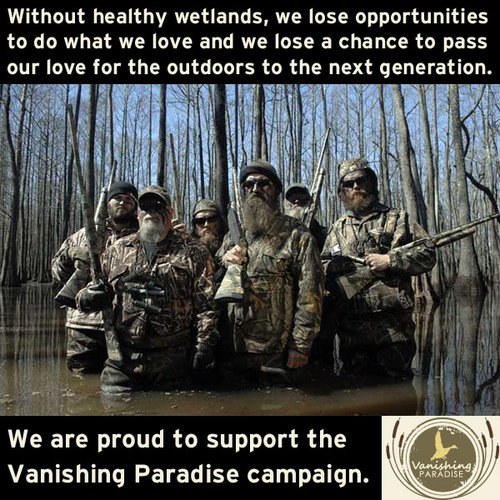 The letter is part of the Vanishing Paradise campaign’s efforts to encourage outdoorsmen and women and the organizations and businesses that support them to advocate for coastal restoration in Louisiana, where the Mississippi River meets the Gulf of Mexico. The Vanishing Paradise Campaign effort is headed by the National Wildlife Federation, the Louisiana Wildlife Federation and Ducks Unlimited.

“Duck Commander has long been a supporter of efforts to protect and restore our hunting and fishing habitats,” said Duck Commander Senior Manager Al Robertson. “Everyone working here at Duck Commander got into this business because we love to duck hunt. Without healthy wetlands, we lose opportunities to do what we love and we lose a chance to pass our love for the outdoors to the next generation. We are proud to support the Vanishing Paradise campaign.”

The marshes and swamps of the Mississippi River Delta offer world-class hunting and fishing opportunities. They are the wintering grounds for as many as 10 million ducks and geese migrating through the middle of North America and are the nursery for fish that populate the entire Gulf of Mexico.

Unfortunately, this unique and vital habitat is vanishing faster than any other landmass in the world. Levees along the Mississippi River have starved the area’s wetlands of vital sediment and freshwater while manmade canals have carved up wetlands and allowed saltwater to penetrate deep into freshwater and brackish swamps.

Nearly 2000 square miles of coastal habitat has been lost along Louisiana’s coast in the last 80 years, an area equal to the size of the state of Delaware. Nearly 20 square miles sink or wash away every year. That land loss threatens hunting and fishing opportunities, entire communities and a unique culture and way of life.

“Losing wetlands in the Mississippi River Delta means the loss of healthy waterfowl populations in this country,” said National Wildlife Federation Senior Manager for Sportsman Leadership Land Tawney. “The Vanishing Paradise Campaign has played a vital role in securing some much needed funding for the restoration of the delta but there is an enormous amount of work to be done if we hope to fully address this dire land loss. The support of Duck Commander and other companies makes our work possible.”

Vanishing Paradise worked tirelessly to rally support from sportsmen across the country to urge Congress to pass the Restore Act last June, ensuring penalties from Clean Water Act violation from the BP oil spill will be sent to the Gulf Coast for ecosystem and economic recovery. The campaign also worked within Louisiana to help win legislative approval of the state’s 2012 comprehensive coastal restoration and hurricane protection master plan, a scientifically-based plan that calls for a host of sediment diversion from the Mississippi River and large-scale marsh and barrier island restoration projects.

“Louisiana is rich in hunting and fishing opportunity and tradition and companies like Duck Commander are a big part of that,” said Louisiana Wildlife Federation Coastal Outreach Coordinator Chris Macaluso. “This state is Sportsman’s Paradise. Thanks to the organizations and individuals who are supporting the Vanishing Paradise campaign, we are working to make sure it stays that way.”