Like other things in 2020, this year’s duck season looks different than others. 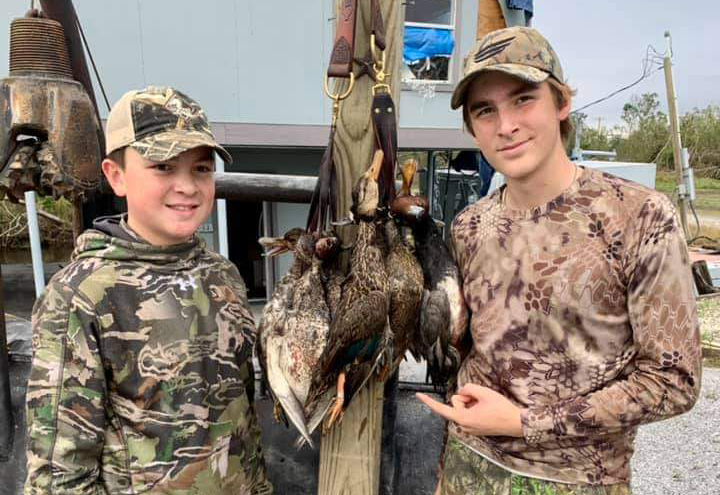 Despite devastating damage to his camp at Sweet Lake, Grant Hillman and friends put on a successful youth hunt.

One thing duck hunters learn quickly is each season is different. This knowledge allows us to have hope after a bad year and not be too surprised when a great season is followed by one where it’s tough to scrape up enough ducks for a gumbo. Following a record bad season last year, three direct hits from hurricanes and all the challenges 2020 has brought, it’s not surprise Louisiana duck hunters are out in full force enjoying their favorite pastime – and many are being rewarded.

“We’re having a great season here due to dry weather up north for the first time in about eight years. There are more wigeon than in recent memory, and pintails, gadwalls, redheads, canvasbacks and ringnecks are all here in good numbers,” Captain Ryan Lambert, of Cajun Fishing Adventures, said.

Jared Serigne, videographer and producer of the Outside the Levees channel on YouTube, also hunts mostly in the southeast part of the state and echoed Lambert’s comments. “I’d say about 50% of my hunts have been good, but part of that is the fact I’ve been out of town with work and not really staying on the birds. Others I know are more like 80% good,” Serigne said.

“I’m mostly hunting around Pointe à la Hache near Mardi Gras Pass. The marsh looks flattened from Zeta, but there are good pockets of SAV, and there are birds there taking advantage. It would be great to get some new ducks, but the main thing is to move around and find something a little different,” he continued. “While we lost some habitat and food to the surge, it also cleared out some invasives. There’s a lot of work to be done to restore our coastal marshes, but duck season so far for me is above recent averages.”

But reports from other areas aren’t as positive yet. “Laura and Delta went east of my camp at Hackberry,” said Warren Coco of Go-Devil. “The surge didn’t impact us at all, and we’re loaded with food. I mean, we didn’t lose a lily pad. We had birds opening day, but it dwindled fast. My place up north on the Black River though is starting to look up.” 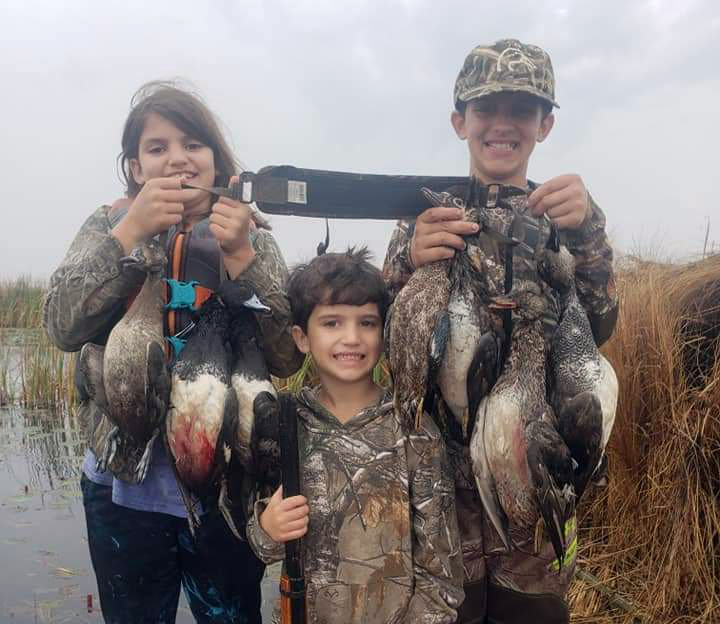 Warren Coco’s camp at Hackberry experienced no habitat loss from the hurricanes, and the youngest generation of Cocos are taking advantage of that.

Grant Hillman of Magnum Outfitters in southwest Louisiana has had a beautiful camp at Sweet Lake for over 15 years. When I asked Grant about his camp he said, “total loss, and that’s why I made a decision to move my waterfowl operation to Kansas this season. The marsh is in better shape than we expected, but between the camp being destroyed and too many habitat question marks, it just seemed the right thing to do for my clients.

“Good news is my friends there report hunting is improving, and there’s a lot more food than you’d think. But instead of taking folks out in the marsh, we’re scouting all over Kansas for ducks and geese. Good news is the birds here are stale, but we’re finding plenty.”

Burton Angelle hunts not too far from Hillman’s camp and reports, “my marsh looks like two bombs went off, and that’s pretty much what happened. There were few ducks therethe first day I

hunted. Two of us limited, but we won’t talk about the species. There are some huge commercial operations in the region not hunting due to COVID, and I can’t help but wonder what they might be holding?”

With such varied reports, I reached out to LDWF Waterfowl Program Manager Larry Reynolds for a broader view. “Well, at my lease north of Creole we had a good opener, but it has been horrid ever since,” he said. “I’ve heard bad reports from Pecan Island, and Little Pecan has been okay but certainly not bang-up. In the southwest part of the state, the farther west you go, the better the habitat and hunting. I wasn’t hearing much from the southeast part of the state since a good opener, but a friend recently hunted with Ryan Lambert and had a great hunt, so it sounds like they are in better shape than anticipated.”

“In short, a record worst hunter success of 11.9 ducks per hunter last year seems to be followed by an improved season in many parts of the state,” he continued. “Hopefully winter weather will come along to help the rest of us.” 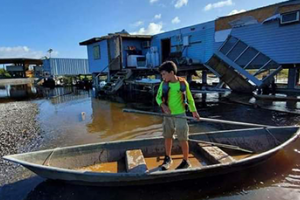 Next: Camps in the Eye