Not Taking the Bait: Talking Forage Fish Conversation in D.C.

This summer Vanishing Paradise joined other anglers in Washington, D.C., to meet with legislators and discuss the future of baitfish. 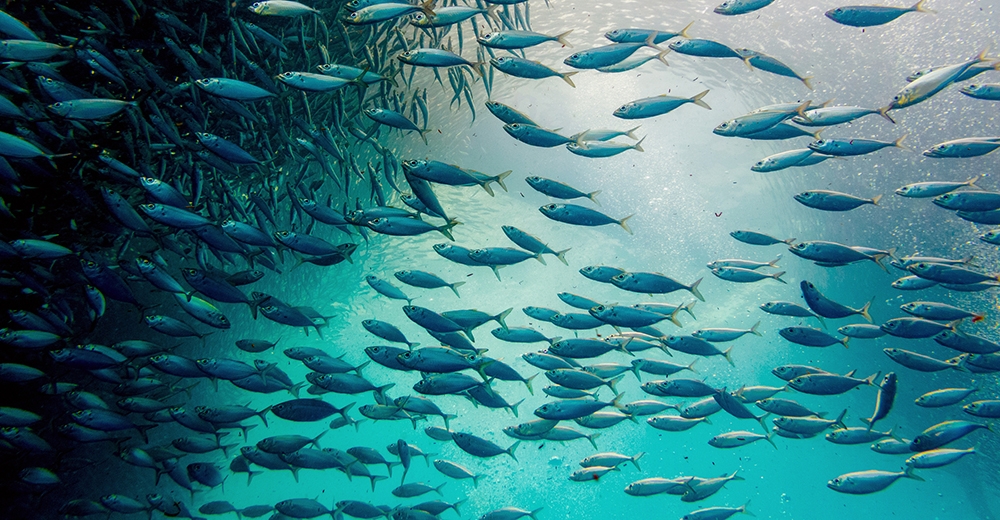 We anglers call them “baitfish,” and we know how important they are to any healthy fishery. The entire food web depends on a robust forage base, no matter the species, but forage fish are currently being harvested in increased amounts for use in skincare and agricultural products, raising concerns among sportsmen and conservation organizations.

U.S. management must adjust to ensure sufficient schools of forage fish in our oceans. Many simply don’t have science-based catch-limits. Fortunately sportsmen have long recognized the need for management of all species to ensure a future for their sports.

The Forage Fish Conservation Act (H.R.2236) was written to ensure that future and support the $887 billion the outdoor industry contributes to our national economy annually. With this in mind, earlier this month a group of hunters and anglers descended on Washington D.C. to share the urgency to protect our forage fish from overharvest.

Here are some highlights from members of the Vanishing Paradise Sporting Council who took time out of their busy schedules to travel to our nation’s capital and make their voices heard on this important issue.

"I’d like to thank Rep. Garret Graves and the good people at the National Wildlife Federation for all they’re doing in Washington to protect our Louisiana fisheries. With over 1 million acres of marsh lost in Louisiana since the 1930s, I hope we can reverse the trend at least in my children’s lifetime. If you have an interest in our coast then please familiarize yourself with the Coastal Master Plan, particularly the diversions. I’ve come to believe this is the only way we can reverse the trend of losing our coastal lands. Also, be sure to check out the Forage Fish Conservation Act. It’s on the floor of the House now, and has potential to stop the overfishing of our baitfish by commercial vessels.” 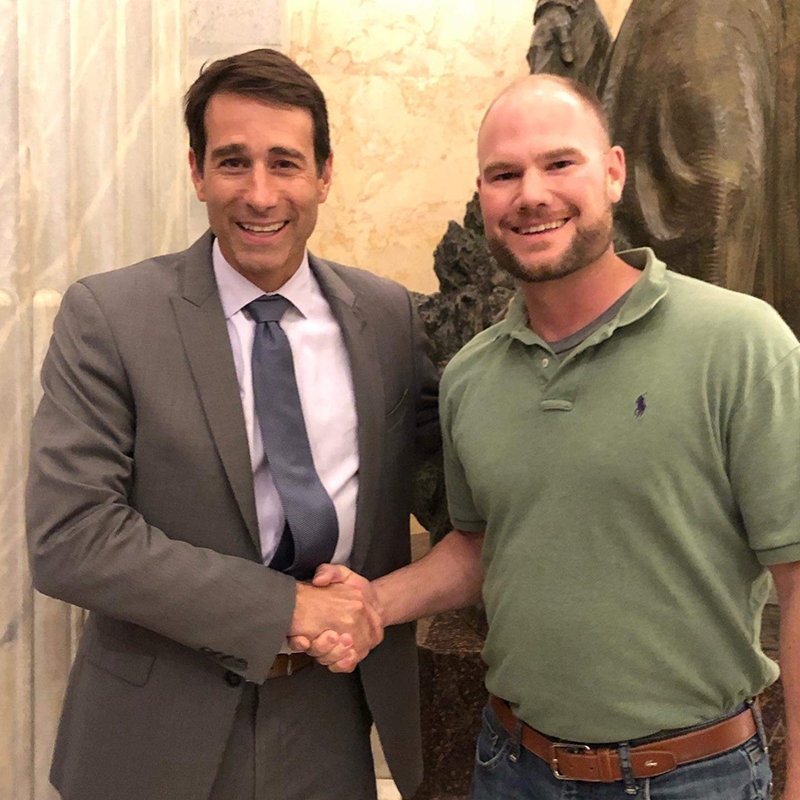 "Today was one of fulfillment to a lifelong calling I never knew would happen but knew it was my goal. I am a passionate hunter and fisherman. It’s my DNA. But I am a conservationist in my soul. Many years ago when I was a wild, young, long-haired save the guppies sign-holding hippy trying to be heard, Rich Youngberg was my first mentor in conservation. He helped educate me that change doesn’t come by opinion and arguing, but rather by educating others. And that is how I began to guide fly fishing trips. I learned that I had a stronger voice by getting people on the river and showing them what conservation and a fragile limited natural resource is. I also learned that in order to make change you had to go to the top. I’ve been from organizations like NWTF, DU, Delta Waterfowl and others, building projects and living the world of conservation. But I knew it wasn’t enough. After many hours in the blind, photos, clients, and many relationships I was given the shot of a life time. The Big Boys. Washington DC. Capitol Hill. True lawmakers who vote yes or no on bills that will impact wildlife forever. My friend Bill Cooksey gave me a shot at the bigs with the National Wildlife Federation. To have one-on-ones with state representatives. To express the need for a bill to protect forage fish in the U.S. And as I walked those massive halls of the Capitol ready to share my passion for wildlife, it became surreal. My “Save The Guppies” sign was about to be heard. I challenge all of you out there to find a way to get plugged in to conservation and share the passion that is not guaranteed to last forever." 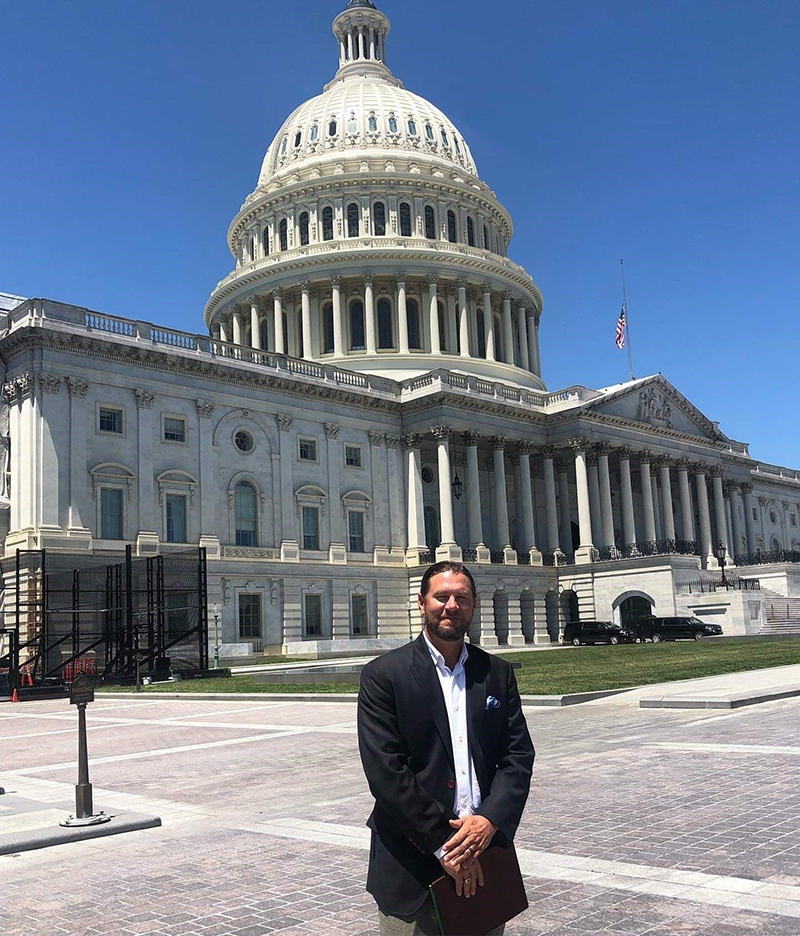 “Everyone wants to know, ‘how was DC’ and that’s hard to summarize and explain, but if you’ll hang with me, I’ll try to piece the story together as best I can.

Two days, wedged into the peak of tarpon season, was a hard pill to swallow.

I told Bill I couldn’t go. Logistics were just too hard. And they were.

But conservation isn’t a “nice to have”…It’s essential. And if I ask my peers, my friends, my family, if I ask them to give up time to participate in meetings and forums and discussions around the myriad of issues facing outdoorsmen, maybe logistics aren’t as hard to overcome?

So I went. Details be damned.

The overarching theme was centered around forage fish legislation. Forage fish (baitfish to us regular guys), are an unregulated take. I’m not talking about guides and blacking out wells, I’m talking commercial boats harvesting football fields full of sardines for use in pet foods or cosmetics. Generally speaking, I’m not a “more regulation” guy, but I can’t find the holes in this one. So it was an easy discussion.

But as we sat with aides and staff and congressmen themselves, they wanted to discuss broader conservation ideals – the Kissimmee River, the Army Corps of Engineers, Everglades restoration, hurricane impacts on fisheries, even invasive plant management was discussed.

Did anything monumental happen?

Nah. I wasn’t asked to dinner at the White House, I didn’t get trapped in an elevator with the Sportsman’s caucus, but real honest change happens incrementally.

We live in a time of mob rule, the vehicle far too often being social media. We don’t like what’s happening, and we pitch a tantrum to call attention like toddlers in Red Lobster.

Everyone wants a quick fix, and the answer is never as simple as we imagine.

The little stuff is where change happens. The meetings. The conversations. The nuance. Seeds of conservation on hopefully fertile ground.

Thank you to National Wildlife Federation and their amazing staff – Bill Cooksey, Jessie Ritter, Glenn Watkins and Michael Happ. Thanks for letting me come along for the ride!

Conservation isn’t convenient. It’s big and hard and got more layers than an onion on steroids.

Thanks for letting me participate in some way on the peeling process!

And that…that was DC. 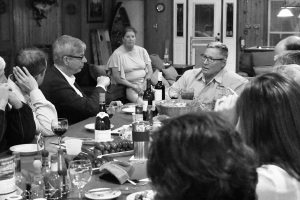 Next: Connecting Sportsmen with State Legislators